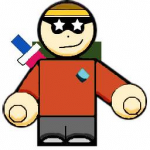 I'm pretty much a free spirit, quirky and full of fun! But, being a nerd, I'm pretty much an awkward free spirit. Doesn't matter, though. I do try my best with stuff, yet quick to judge. Oh, and one more thing: I. DON'T. TAKE. KINDLY. TO. ANTI-VAXXERS. EVER.

Also, due to recent events - such as the virus - I'm much more prone to being random than before, but that's so I can cope with the boredom of being stuck indoors. #RelatableContent, right?

Fav. Colour's yellow (though I know more about colours than I'd like to), Favourite character from S.U is a tie between the guacamole space dorito and the smol mom (or, the fun mom), and least favourite favourite character in the show is Kevin. To those who ask why, I will say "Have you even been watching the show, or are you dumb as dirt?".

Retrieved from "https://steven-universe-roleplay.fandom.com/wiki/User:SmilyWiki112?oldid=60289"
Community content is available under CC-BY-SA unless otherwise noted.